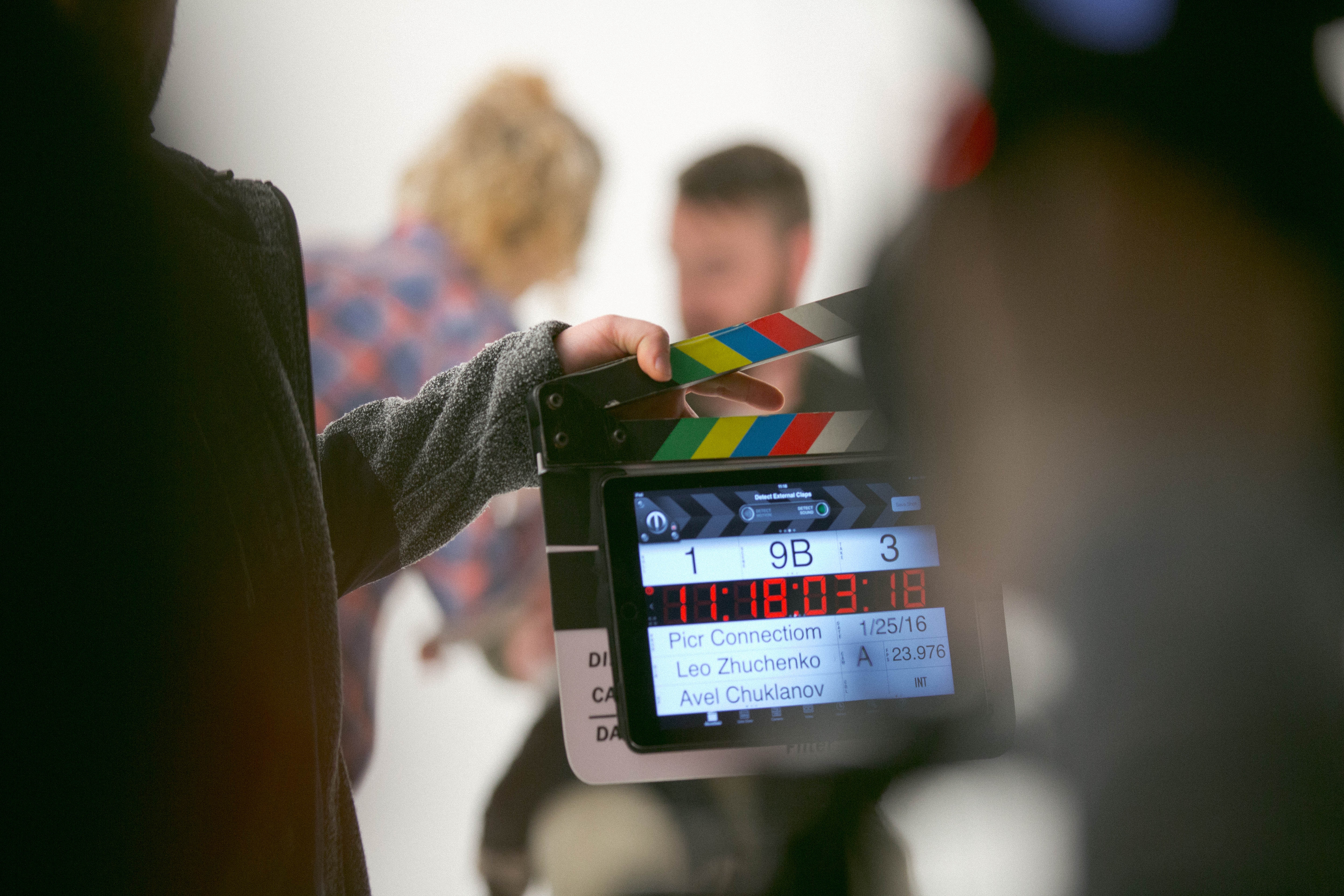 Get cast on skates in television, movies, and print.

Who hasn’t given at least a passing thought to seeing their name in lights or face onscreen or in a print ad? Most of us won’t be signing multimillion-dollar contracts anytime soon, but with more and more roller skaters being cast in TV commercials, films, and print ads as extras and featured players, you can at least get a taste of life in front of the camera.

Fortunately, you don’t need to live in a major city to find acting and print advertising opportunities. Many casting agencies hire real people for all types of jobs all over the country, so the “secret” to landing this type of work isn’t really a secret at all—just do some research and find a casting agency near you and sign up for their email list. Most agencies send email notifications to their subscribers about jobs in their coverage area. “We never know from day to day what the specs will be for a job. If someone has that particular skill, we recommend you get back to us very quickly,” advises Julie Knowlton, casting agent with Slate Casting in Boston, Massachusetts. “Give us a brief description of your experience and what type of skating you do. Pay attention to the information we give about what we need.” Slate Casting conducts searches for real people for projects all over the country, and professional actors for film and TV work in New England. Visit the “For Actors” page on the agency’s website to sign up for their email notices.

Rachel Mossey, owner of casting agency Weeble Mountain in Portland, OR, says any skater interested in acting opportunities should create a profile in the agency’s database.  “Skaters should definitely log into their profile after applying and list your skills! We also recommend skaters upload photos of themselves skating, in addition to some everyday shots. You definitely don’t need professional head shots. In fact, snapshots are often better for us.” Weeble Mountain casts actors, models, and extras for all kinds of on-camera projects in Portland and the Pacific Northwest, including film, TV, commercials, music videos, photo shoots, and more. “Once you’re in our database we can reach out to you for all kinds of projects—not just those that are skating-related. You’re always free to decline anything you’re not interested in, but it’s good to get experience on set if you’re interested in this kind of work.”

How to break in and stand out

Preparation is the key to a successful audition, and casting agents can tell the difference between someone who’s prepared and someone who’s not. “Preparation” means a number of things. “Have a toolbox of things—pictures of yourself, a video of you skating, maybe some bullet points of yourself so that’s all set to go,” Knowlton suggests, reiterating that it’s not essential to have a professional head shot, but helpful to bring an 8×10 photo of yourself with your resume, skating experience, and all-important contact information on the back. “Be fully available and get the information to us as quickly as possible. Being able to reach you is really important. As far as what we look for in talent, read up on what we’re asking for, if there’s a script you can look at that in advance…be as prepared as you can be. Be confident and feel good about yourself, and do your best.” Above all, point out any unique skills or qualities that help you stand out from your competition. “For something like skating, skill comes first!” Mossey says. “Then we look for an interesting look. We really value diversity and people who look real and relatable. There is so much you can’t control about how people perceive you. We want to see what people really look like—not highly curated, filtered shots, and get a sense of their personality. Trying to control your image and sending us what you think we’re looking for is the wrong approach.”

Nicole Fiore, a former professional skater who turned to coaching and acting full-time after retiring from competition, has a series of tutorials on her YouTube Channel for skaters who want to break into acting. She has a few additional tips: “Learn to look comfortable on skates in a very small space. Rinks are wonderful, but most shoots are done in very small spaces. So get those edges right and you’ll be good to go! And don’t take anything too personally. You could be the best skater in the room and not even get a callback. It’s simple. You may not have the look they were going for. Let that stuff roll off your shoulders and move on.”

How to find acting and print work

Fiore has been skating since she could walk and began competing at age 4. Her successful professional career included four World Championship medals. She started auditioning at 16 and has worked on projects for Tommy Hilfiger, Katy Perry, and others.  “I have two older brothers who were working in the industry and auditioning frequently, so I tagged along. Most jobs only hired 18-plus for legal reasons. Every once in awhile I would get hired on and they would find out I was only 16 or 17, and would have to fire me. At age 18, I was finally legally hired on jobs and began working!”

For skaters new to the business and trying to find jobs, Fiore says there are some good resources available besides signing up for casting agencies’ lists. “There are many websites available, like LACasting.com, but most of the jobs are spread on Facebook and word of mouth. There are Facebook groups that send out information as it comes through. And it’s a good idea to get connected with your local rink owners/managers because they get calls all the time and will need skaters to refer.” If you’re serious about breaking into on-camera work, it’s good to read trade publications like Backstage in order to stay current with trends and news within the performing arts industry.

What to expect during an audition

An “audition” is a broad term for anytime a performer must demonstrate their skills. Casting agents typically hold two types of auditions—an open call, in which essentially anyone can show up to audition, or a closed call, in which a performer has an appointment with a casting agent.  Although the atmosphere of every audition is different, expect plenty of controlled chaos with so many performers and personalities in one room. “[A casting call is] a bunch of people on skates—some great, some terrible. A casting call can be held anywhere—a rink, a studio, outside. Typically you get a number and wait for awhile. You are called up to introduce yourself, take a picture, and maybe say a thing or two about your skating experience on camera [called a “slate”]. They hopefully put a song on—it is so awkward to skate to no music—and you show them your best moves for 30 seconds to a minute. Say thank you, leave, and hopefully get a call a few days later from them that they want you!”

Not every project has an audition, Mossey points out. “Some roles are booked directly from photo or video submissions,” she says. “Some require auditions, and some require callbacks (a second audition) or a go-see (meeting with the director) too. These are unpaid—think of them as interviews. You are only paid if you get hired for the gig.” Mossey adds you should only go to the audition if you are completely available for all dates listed—callbacks, wardrobe fittings, and all shooting dates. Casting agents expect and appreciate patience and professionalism. “You should set aside a full hour for the audition. The audition itself may only take 2-7 minutes, but there is paperwork to fill out, and a waiting period. It is very difficult for casting offices to stay on schedule, so there is often a significant wait, but it’s almost never more than one hour. Don’t ask to skip the line or mention a time crunch; it’s most professional to expect a long wait, then sit patiently,” Mossey adds.

Pay rates vary depending on the type of job and how long you’ll be working. You can expect to make anywhere from $350 for a few hours of work to a few thousand dollars for a shoot that takes several days. Casting agents typically include pay information in their casting call emails.

Just like auditions, every set is different. “In general there’s a lot of waiting, but when you’re called to set, it’s all about being professional and listening to the people in charge. And you usually get a really good lunch!” says Knowlton. “I rarely hear of anyone who doesn’t have a good time—it’s always a learning experience. Just have fun and enjoy it.”

Fiore recalls one of her more memorable projects. “One of my most memorable jobs was actually my very first job. I had mono and was so sick. My doctor told me not to do any physical activity whatsoever. I told him I had to skate in a commercial the next day. We shot all day in Venice Beach and I felt awful by the end of the day. Luckily, it was so much fun and so worth it.”

Another memorable job was working on a Tommy Hilfiger/Gigi Hadid fashion show in 2017. “We had just filmed an ad for the line. We were called Tommy’s RollerSquad. A few weeks later, we were asked to roll through the actual fashion show. As a fully-grown woman standing 5 feet 2 inches, without my skates on, this was a dream come true! I got to roller skate in a huge fashion show! It was amazing.”

Like so many other ventures in life, you never know what opportunities your passion for roller skating may bring your way. But if you’re interested in seeing what possibilities could be in store for you on camera, follow the above tips, do some research, and make your talents known to casting agents and others in the industry who are looking for what you have to offer—who knows where your skills may take you!