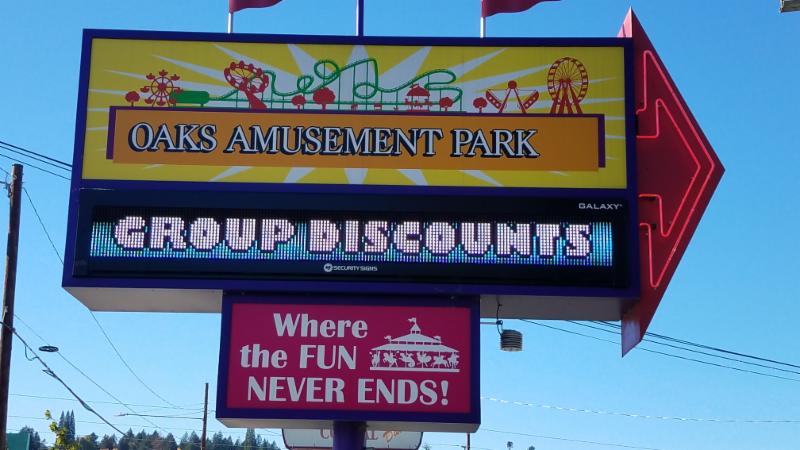 A roller rink with a theatre pipe organ.

Oaks Park is one of 11 trolley parks still operating in the United States. Built in the early 1900s by transportation companies to enhance ridership on weekends, The Oaks Roller Skating Rink is part of a Portland, Oregon amusement park. It has the only Wurlitzer theatre pipe organ still in use today in a roller skating rink. This one instrument is an orchestra in itself, with enhanced sounds made for silent movie theaters. It’s different from a church pipe organ.

The Oak’s Wurlitzer organ has 1,500 pipes and there are only two other organs like it. It was originally built in 1926 and used at Portland’s Broadway Theatre. In 1955, the organ was installed at Oaks Park. It wasn’t the rink’s first theatre pipe organ. In 1922, the rink installed a William Wood theatre pipe organ, perhaps the first roller skating rink in the United States with such an organ.

Many regional theatre organ societies exist in the U.S. One is called the Puget Sound Theatre Organ Society (PSTOS), it has a section devoted to the history of 17 roller skating rinks that once had theatre pipe organs in Oregon and Washington.

When talkie movies came about in the late 1920s, many theatre pipe organs were sold cheaply and there were a lot of talented, yet out of work
organists looking for jobs. Roller skating rinks benefited from this historical phenomenon.

Because of its location next to the Willamette River, Oaks Park has flooded three times. After the first occurrence in 1948, a new skating floor was built with iron barrels, which allows the floor to be cut loose when the water starts rising. This saved the rink from floods in 1964 and 1996.

Editor’s Note: This article first appeared in “Rolling Through Time,” the official newsletter of The National Museum of Roller Skating. Please support the museum by becoming a member to keep our history alive.