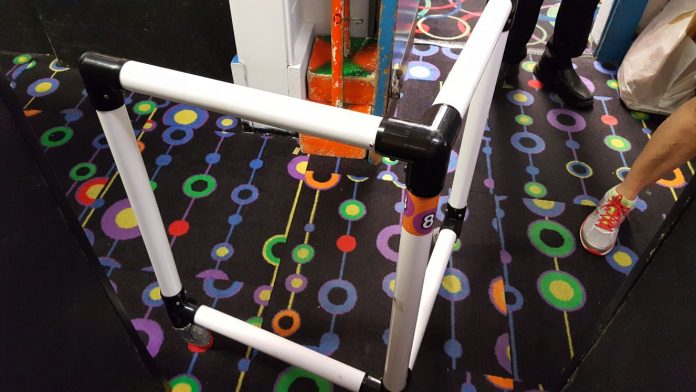 If you’ve ever had an encounter with a Skate Mate Trainer, those “plastic bar thingys” that are supposed to help a kid learn how to roller-skate, then you no doubt have an opinion about them. They’re like a walker on wheels, and are supposed to help gain stability and confidence as kids first learn how to skate. And just like the evolution of bike lanes on roadways, these things also need their own lane.

Rink owners, parents, and kids LOVE them, and these devices generate a significant amount of income for family entertainment centers (FECs). Parents can chill on the side line and stare at their phone. And the kid feels some freedom, even if they are frustrated because they can’t skate, or figure it out on their own.

The FEC rinks, those that cater mostly to kids, rent out the Trainers by the session or the hour. Traditional, old-fashioned skating rinks tend to avoid them, either out of lack of space, or a refusal for other reasons. Parents can get upset if the rink runs out of them during a session. Yes, they can be demanding and a bit nasty at times with rink management if they can’t get one for their kid. Just ask any rink owner who has run out during a busy Saturday afternoon.

Skaters have complained about kids misusing them: from darting back and forth across the lanes of traffic, to sitting and riding on them, tossing them back and forth, having one fall over right in front of you, or watching parents get into fist fights over them. Yet, now it’s hard to find a rink without the skate mate trainer.

Where they came from.

Skate Mate Trainers first showed up in rinks about a decade ago. They were designed to help a kid learn how to roller-skate. Early versions of the Skate Mates toppled over easily and caused a hazard to other skaters. The stability issue has been improved.

There are several sides to the debate about skate mates. Other skaters are annoyed by them, and worry what will happen if one comes flying over at them, which does happen. Those who are really annoyed by Skate Mate Trainers are the seasoned skaters who took lessons and purchased skates, only to have to skate around a moving danger zone.

I understand why rinks use skate mate trainers. The income they generate help keep the place open, and now parents are demanding them. They can generate 10s of thousands of dollars every year, so they’re not going away.

Some rinks are big enough to have a “baby rink”, which is a great solution to accommodate the Trainers. But for those that only offer one floor, how about a simple compromise? One that was first introduced and tested by Sandra Levin of Orbit Skate in Illionois, and recently added to the Bristol Skateway in Tennessee. Both of these rinks painted a lane along the wall surrounding the skate floor, so beginners and wall-clingers had their own assigned lane and a wall to help as well; while faster, more experienced skaters had the rest of the rink. The idea is genius, and it works!

As an added bonus, Gary Easmunt, of the Bristol Skateway shared that the skate mate slow lane also forces other skaters to slow down when exiting the floor. This keeps those who are standing off-rink from getting knocked over by a rambunctious, out-of-control skater. Plus, those who tend to stop along the wall to socialize, won’t be able to with all the traffic coming through.

Why not use the center?

Some rinks have designated the middle of the floor for skate mate trainers, using a floor guard to escort them back and forth across busy lanes of traffic. But why? It interrupts the flow, it inhibits advanced skaters from practicing skills in the middle, and it’s dangerous for all involved. The center should be a place to showcase great skaters, practicing dance moves. It attracts positive attention and spurs interest.

And the Shuffle Skaters?

Shuffle skaters argue that slower skaters should be not be taking up space along the rink wall. Understand, I’m talking about an afternoon session where skate mates are typically rented out. For adult skaters who want the outside lane for shuffle skating, then yes, the lane is re-purposed during those sessions to remind slower skaters to stay out. Wall clingers or skate mate trainers don’t mix well with shuffle skaters, anymore than hockey and figure skaters practicing simultaneously on the same floor. Skate Mates should not be available during certain sessions.

Adding a slow lane for new skaters and those using skate mate trainers is a win-win for beginners and advanced skaters alike. Plus, the floor guards can keep a better flow of traffic moving at all times.

Share
Facebook
Twitter
Pinterest
WhatsApp
Previous articleSteer your career into rink management
Next articleLast Minute Holiday Gift Ideas
Susan Gearyhttp://https//susangeary.com
I roller skate and I write about. As the former Editor of Rinksider Magazine, I have amassed a wealth of knowledge about rink management, and have developed a network of successful rink operators to glean the best information from.
RELATED ARTICLES
Recreational / Session