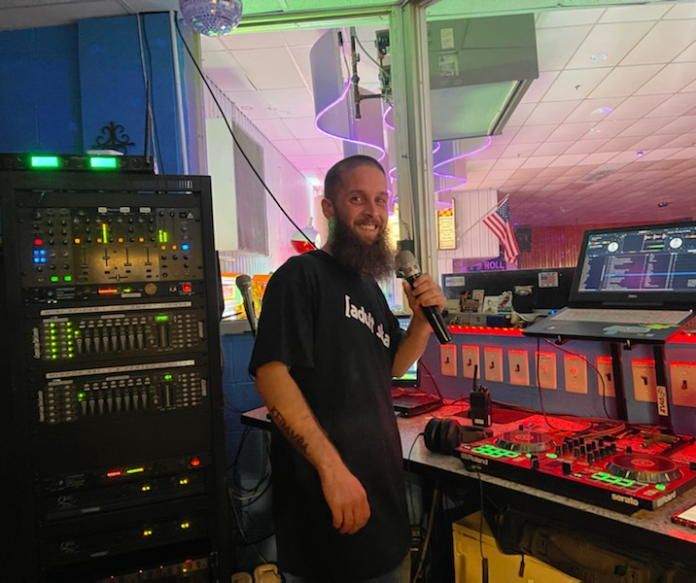 As someone who has skated at rinks all across the USA, there is one thing I know for sure: a great roller rink session is only as good as the DJ running it. A highly experienced DJ can make your atmosphere great. An untrained DJ can ruin it. Yet over the past two decades, I’ve noticed it’s the first role to be downsized, rather than developed into a talented individual charged with entertaining and controlling a crowd of enthusiastic skaters.  In some of the worst cases, it was like being in a nightclub with a jukebox providing the dance music. Yawn.

Skating rinks could learn a lot by investing in great entertainers. I’ve seen teens in charge of music with little understanding of what’s a good song and what’s a bomb. They will immediately play any and all requests, regardless of appropriateness or tempo.

“A good song on the radio can suck on the skate floor,” revealed Rob Williams of the Bristol Skateway in Tennessee. A good deejay knows music, “especially, ‘skate-able’ music,” he added. At 35, he’s been a rink emcee for the past two years. He knows how to set the pace, when to cool down the floor, how to quickly pivot to address emergencies, and most importantly, keep skaters coming back – along with their friends.

Rob was born into the rink industry whose family has a solid background in competition and rink operations management. Three years ago, his parents decided Bristol would be a great place to rescue a dilapidated abandoned skate center, which has since been fully restored and eagerly welcomed by the community.

Rob and his partner, Kortni were brought on board to help manage the new venture, but when the original DJ didn’t work out, he stepped in to fill the gap. He told RollerSk8r about growing up around great rink DJs. The music part he had down solid.  Speaking on the microphone, was more of a challenge. “We use FEC (a music program for family entertainment centers),” Rob mentioned. “It’s great for beginning DJs. They have canned announcements if you need them.” Eventually it got easier. Now he’s always live on the mic, changing up the music to keep it fresh.

How does he entertain a huge crowd so everyone gets to hear their favorite tune without pissing off all the other skaters? For one, he never plays anything of the same genre more than 3 times back-to-back. In other words, don’t play 5 disco songs, or hip hop, or country songs in a row. You can mix it up, keeping the beats per minute more in line. “You gotta be able to bounce to it. Old jams are still the jams. They’re not going anywhere.” But playing a country, rock, skate jam, and hip-hop song once or twice in a row, works well, if you do it right.

A good thumping sound matters, too, but not so loud that people in the snack bar have to yell to have a conversation. Nor should the speakers be over-modulated.

Williams also mentioned when it’s time to kill the vibe. “That’s when you need to slow down your floor. I can play a request, or clear the floor for couples and play something with a good waltz to it. If you can waltz to it, you can skate to it,” he added.

What exactly is skate-able music? For Rob, “it’s got a good beat to it, 110-120 Beats Per Minute (BPM). Ideally, I play a lot of 120 to 125,” he admitted. Knowledge of music matters, too. He mixes his vast knowledge of the old school skate jams, with the latest releases to stay up-to-date.

As for music requests, he gets an extensive list from his regulars but won’t play everything. That includes songs with explicit or suggestive lyrics, or at least the kind that have moms complaining during family skate. “That’s why you have to know your music. You can’t play a random song,” he reiterated.

The DJ, along with the floor guards run games and activities to keep the crowd entertained, while improving their skating skills at the same time. At Rob’s rink, that means limbo, trios, Ghostbusters, jailbreak, pool noodle relay races, wipeout, reverse, couples, jam skate, fast skate, glow skate, and the dice game. “It’s important that you read the crowd.” Don’t play games that require a lot of skating skill when there’s mostly beginners on the floor. “Don’t mix advanced skaters with beginners. That’s just asking for trouble. Break them down by age groups,” he suggested.

Communicating with the rest of the staff is paramount and it’s not easy when working around loud, thumping music. Bristol Skateway utilizes 2-way radios among the managers, skate guards, security, and the DJ. That way if they need to respond to a bad fall, or address unruly guests, they can quickly attend to it without making a scene. Rob turns on a row of lights to point out skaters who fell, quickly alerting floor guards who may not have seen it happen and need to urgently respond.

Watching a great deejay in action can make it appear like a super-fun occupation, and it is. However, the gig is not without its challenges, including how to entertain when there’s only a few people in the building. “Achieving a vibe is hard with a small group,” Williams admitted. “That’s when you handle requests. You play whatever they want, even if it’s not a good skating song.  You can also play fast games, like limbo, and go reverse and backwards. Change it up.”

Accidents can be daunting but they are part of any roller-skating rink. Floor guards are trained to blow 3 hard whistles as loud as they can. From there the DJ turns up the house lights, and clears the floor while the injury is being assessed. Next up, is determining if a 9-1-1 call is warranted and whether or not to keep the floor open for skating. It’s important that the DJ remains calm and keeps the audience focused elsewhere. They came to have fun.

Side work:  Since the DJ gets the most fun job in the building, s/he also can get assigned the worst side work, whether it’s changing out the garbage can liners, picking up parking lot trash, or in Rob’s case, cleaning the restrooms. He doesn’t mind sweeping the rink floor, but finds people’s toilet habits could use improvement.

All businesses are required to have emergency backup lighting during power disruptions. In roller rinks, the DJ will typically use a megaphone or battery-operated speaker and microphone to give clear instructions on how to proceed.  If the building isn’t packed, skating can resume, as long as there’s a backup plan and music ready to go. Preparation is key.

Bristol Skateway does practice drills with the staff just in case there’s ever a tornado in the area. “We have a tornado horn on our back pole that gets tested weekly. We hear it and are warned first, even through the loud music,” said Rob.

Staying abreast of tricks of the trade and the latest song releases is a top priority for rink DJs. There’s plenty of inspiration across social media. Rob follows DJs he wants to learn from. He points to  Instagram, TikTok, and Facebook, as well as YouTube tutorials to find the top disc jockey influencers..

During our conversation, Rob said, “don’t download songs off YouTube. You can get into trouble. And never forget, that the DJ is the pulse. You control the rink. If it feels boring, it’s boring.”

Share
Facebook
Twitter
Pinterest
WhatsApp
Previous articleWhy Rinks are Changing their hours and Drop-off Policy
Next articleNewbie Skaters: Welcome to the Rink.
Susan Gearyhttp://https//susangeary.com
I roller skate and I write about. As the former Editor of Rinksider Magazine, I have amassed a wealth of knowledge about rink management, and have developed a network of successful rink operators to glean the best information from.
RELATED ARTICLES
Rink Life

Are your Skates Causing you Pain?