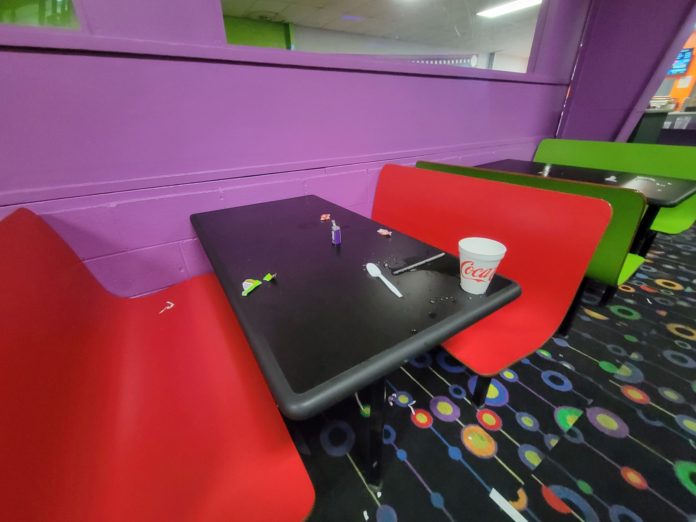 It’s a lot harder than it looks.

As with any business, a great roller skating rink becomes great because of its people, first and foremost. And that starts with the owner/operator. If you plan on owning a rink, you’re going to need to be there and be involved for it to succeed. It’s a fun gig. It’s also a bit chaotic, especially public sessions. Before taking the leap to roller rink ownership, read through this list of typical scenarios you’ll encounter on any given Saturday. Yes, you’ll be working weekends and a lot of nights. And dealing with a lot of different characters.

Hosting multiple birthday parties means figuring out how to get all those pizzas made and delivered with few ovens.

Someone shows up without a party reservation, along with 12 guests in tow, and then become furious that you can’t accommodate them without advance notice. There are also attempts to sneak in a cake and take over several tables in your snack bar.

The regulars, (aka Rink Rats) skate fast and scare the beginner skaters.

There are messy snack bar tables and overflowing trash cans to contend with. It’s worse when the rink is open all day, rather than closing and cleaning between sessions.

Did I mention the customers leave a mess? Small candy wrappers, ketchup packets, and French fries are often found throughout the building. And let’s not forget that teens pull apart Styrofoam drink cups into little bits.

You have to enforce rules

That means keeping an eye out for underage teens trying to sneak in alcohol, cigarettes, vapes, or other drugs. That’s why you’ll be checking restrooms a lot.

You have to tell a parent they can’t carry their kid on skates. (This happens more than you think.)

Amorous teens making out, a parent sees it and complains, and you get to be the bad cop.

Some regular teens can develop an attitude and help themselves behind the snack bar while on skates.

Then there’s staffing issues. Employees who don’t show up, quit without notice, or get their feelings hurt when you tell them how to do their job.

Are you good in a crisis?

A person gets injured and needs ice or medical attention.

An ambulance is on the way, and you still have to entertain the other 400 skaters in the building.

Can you quickly switch gears?

Your beverage delivery didn’t show up, or your soda fountain stopped working. Now you have to buy it at a grocery store until that gets resolved.

There’s a power outage. The generator is hooked up to keep the music going.

A toilet is backed up and needs a plunger.

Someone wants to buy a pair of skates, but they need to be fitted and special ordered.

There’s a line at the redemption counter, because a kid takes a long time to decide what prize they can get for 37 tickets.

A 60-year-old grandma wants to rent skates, despite not having been on skates for 40 years.

A kid puts his skates on backwards (wrong feet.) Or the laces get loose and are trailing behind them, which can cause an accident.

The DJ plays an inappropriate song. Someone is mad.

A fight breaks out. Parents are called. (or sometimes it’s between parents)

A parent bitches that skate mates cost extra, and is some cases, have gotten into fisticuffs over them, complete with a video that goes viral.

There are skates and shoes sprawled out all over the floor, because some people don’t return skates to the rental counter, which means extra work for your team members to go retrieve them.

The restrooms run out of paper. Did I mention the toilets need flushing? Small kids have a hard time reaching the lever.

An arcade game malfunctions. It’s either out of redemption tickets, or doesn’t work, and you’ll be expected to get it fixed on the spot so that a little kid isn’t disappointed.

A line is starting to form, and an employee needs extra help at the rental counter or snack bar.

There are customer reviews to respond to, good and bad.

Kids play hide and seek, causing their moms to panic. Even worse, a kid has a bio-accident in the play zone, and it has to be shut down and cleaned. (CODE Brown or Yellow).

A floor guard is not doing their job and spends too much time chatting with friends.

There’s garbage left behind in the lockers, like a half-consumed Pepsi and other things that attract pests.

Plus, there are constant interruptions, from customers and employees alike.

It’s not that bad.

With the right training and practice, you can learn to manage expectations and interruptions, and prepare for the occasional medical emergency. Thankfully, most of these incidences don’t happen simultaneously,  although some days, it can feel like that.

On the positive side, you will meet amazing people who love what you’re doing and will become your best customers. That’s what makes this industry worth it.

Attract a legion of fans

Learning how to cordially address complaints and thorny workplace issues will make a positive difference in your sanity, and the type of customers and employees that love and respect what rink operators provide for them. They are out there. It’s up to you to provide the vibe and consistently enforce the rules in order to attract them.

I’m not trying to talk you out of rink ownership. I want you to understand everything that’s involved so that you don’t make an expensive mistake if it’s not for you. The right owners — those with passion, knowledge, and an understanding of their customers — along with a willingness to roll up their sleeves and get into the thick of it, make the best roller rink operators.

Thanks for doing your homework.

Share
Facebook
Twitter
Pinterest
WhatsApp
Previous articleShould Roller Rinks have Windows?
Next articleFECs vs. Roller Rinks
Susan Gearyhttp://https//susangeary.com
I roller skate and I write about. As the former Editor of Rinksider Magazine, I have amassed a wealth of knowledge about rink management, and have developed a network of successful rink operators to glean the best information from.
RELATED ARTICLES
Careers